I first saw the RhinoWolf tents on a Fb ad and was immediately interested in this product. What a cool idea! Not only was their marketing really slick and fun, but the tent itself looked amazing. An all-in-one tent, sleeping bag, and sleeping mat for 5.5lbs, PLUS they’re module: you can combine the individual tents by zipping them together to accommodate groups of any size.

I loved this idea! I asked for it for Christmas (since they’re a bit pricey) and my parents were kind enough to get one for both my fiance and me. We were super excited, we do a lot of backpacking and this seemed like a great alternative to some of our other gear… until we opened them up and tested it out.

After trying out the RhinoWolf tent, we were really disappointed in this product. Here are the issues that we have with these tents:

What my full video review as I discover these things while setting up the RhinoWolf tent here:

They’re not waterproof in light rain

This was the deal breaker for me. For a $300+ tent, I expect it to keep me dry and not leak if there’s a little bit of rain.

I had read a comment from another user after receiving the tents saying that their tent wasn’t waterproof. RhinoWolf had responded to them asking them to send it back and they would see if it was a manufacturer defect without guaranteeing any sort of refund even though their website says “100% satisfaction guarantee”:

Because of this, I wanted to make sure that our tents would be able to shelter us in a little bit of rain, so I tested it out. I live in Southern California, and it doesn’t rain here often – and when it does, it’s not a very hard or constant rain. I set up one of the tents and left it out overnight when it rained and then came back in the morning to see what happened. I opened the tent and this is what I saw: 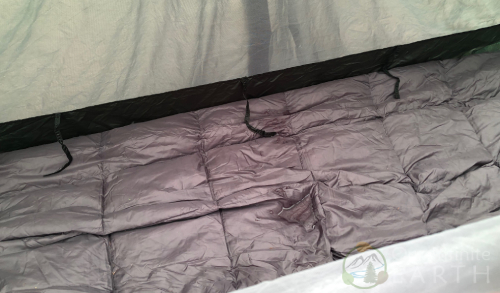 A puddle of water inside the tent.

To me, this isn’t acceptable. I would understand if there was a huge down pour or something, but there wasn’t. RhinoWolf has said that the tents are chemically treated to withstand up to 2000ml of rain.

To be fair, I didn’t measure exactly how many ml of rain came down that night, so I don’t know if it was more or less than 2000ml, but I’ve used my current tent in rain of a similar level as that night and have been fine.

You can’t return it even if it’s broken

After the above issue of the tent leaking, I reached out to RhinoWolf asking if I could return the tent since the website said 100% satisfaction guarantee.

They told me that it was probably condensation even after sending the pictures above and to test it again (because I can just command it to rain here in Southern California in order to do that!…)

Luckily, a few weeks later, it did rain, and so I got my tent out again and tested it again. And again it leaked. I sent more photos and videos to RhinoWolf showing that this was a LEAK and NOT CONDENSATION, and again asked if I could return the tent.

Here is their reply:

Again, no possibility of a RETURN. Given that their address is in ISRAEL, which would be very expensive to ship to, I asked for a pre-paid shipping label so that I could send them their faulty tent. I’m the customer and I have a broken product, I should not have to pay to send it back and get something that works for the money I spent. I NEVER GOT A REPLY.

The next biggest issue for us was the “sleeping bag”. RhinoWolf claims to be a “mattress, sleeping bag, and tent” all in one:

But the “sleeping bag” isn’t a sleeping bag at all – it’s just a quilt.

Maybe I’m just getting into semantics here, but when I see “sleeping bag”, I expect a sleeping bag – meaning: a top and a bottom that is connected on three sides. This is not what RhinoWolf delivers with it’s “sleeping bag”. It delivers a down-stuffed quilt (or blanket), which then zips into the bottom of the tent. This leaves you with only having the warmth of the quilt from one side – the top. Below you is the bottom of the tent (thin polyester) and the sleeping mat.

Being exposed to the ground (essentially) on one side is not going to be effective for keeping you comfortable and warm at night, in my opinion at least. We got the 2-season tents, which are supposed to be rated for down to 40 degrees… I’m not sure exactly what that rating means (there’s a big gap between “you won’t freeze to death” and “you’ll be comfy and warm”), but I don’t think that this one-sided quilt is going to keep you comfy and warm if it’s 40 degrees and there’s nothing below you.

Either way, I feel like the marketing is deceptive in that it’s refereed to as a sleeping bag, when it’s really not.

The sleeping mat is just a regular mat

This is more of an observation than any negative/positive factor about the tent. The sleeping mat isn’t built into the tent or anything – it’s just a regular sleeping mat that lays at the bottom of the tent – just like any other that you still need to manually blow up.

Not everything is fully module and connect-able

One of the biggest selling points of the RhinoWolf tents is that they connect with each other. I don’t know of any other tent system that does this. And yes, the tents do connect to each other and you can connect as many of them as you’d like. But, ONLY the tents connect – the rest of the unit does not.

I think my disappointment in this is mostly my fault and my mis-assumption of what these tents can do. I thought I’d be able to connect everything with the two tents – sleeping bags included. This functionality is not something that the tents offer.

When we go backpacking, we carry a two-person sleeping bag with us because we like to sleep together and also so that we can use each other for body heat. That sleeping bag is heavy, so we were very excited about the idea of finding a replacement to carrying that bag. Unfortunately, you aren’t really able to zip together two sleeping bags from two different tents to create one big sleeping bag for two people. I really tried and managed to force them together, but this is clearly not how they were meant to be used and not something that’s viable or sustainable.

Nothing on the website says that you’d be able to do this, so it’s not misrepresenting that feature or anything, but there’s also nothing that says that you can’t do this. I just assumed that you could since it says that everything is able to be connected, so was disappointed when this didn’t work.

Not worth the cost

The cheapest version of these tents are $340.

So let’s break down what you’re getting and the costs of each of those things if they were purchased separately:

The total of the above is $90- $180 for a similar quality tent, blanket, and sleeping mat. That’s 1/4- 1/2 the cost of what RhinoWolf is charging for their tents. Sure, these items don’t combine, and they’re probably going to be heavier than the 5.5lbs of the RhinoWolf tent, but to me, that’s such a huge difference in price for very little difference in quality, that it makes the cost of the RhinoWolf not worth it.

I’d be remiss if I didn’t point out the good things about the RhinoWolf tents, because there are several features that I think are really great:

Overall, I really wanted to like these tents. Their marketing was awesome and they seem like such a great idea. I think they’d be great for single friends who like to camp or go to festivals, but don’t always go with the same group of people – and generally only go camping in warm sunny weather. It’s a great “Party Tent”.

Unfortunately, for us, they fell short and aren’t going to work. When we’re backpacking for days at at time – we need a tent that will keep us dry, and we need a sleeping BAG (not quilt) that will keep us warm. That’s aside from wanting to be able to sleep together in a bag so that we can share body heat. These are fundamental needs that RhinoWolf just doesn’t deliver on.

What To Wear Hiking