If you’ve every driven between Los Angeles and Las Vegas, you’ve probably driven past the exit for Zzyzx Road on Route 15 and had a laugh at the ridiculous name that you’re not even sure how to pronounce. (It’s pronounced Z-eye-zicks by the way) More than likely, you didn’t stop to check out what’s at the end of this road. Well, next time you’re making the drive and have some extra time or just need a break, check out ZZyzx Road because you might just be surprised about what you find.

What Is At The End of Zzyzx Road?

At the end of Zzyzx Road is a mineral spring. Yep, that’s right – in the middle of the desert, there’s a spring. And not only that there’s mineral spring/health center that has been built up around it. It’s still operational and there are still people that live there. It’s used mostly for research purposes now, but visitors are welcome. Just don’t go walking around inside the buildings, but you can take a stroll on the grounds and look at the views. There’s a separate parking lot at the end of the road on the right for visitors that don’t have an appointment where you are asked to park so that you don’t bother those who live there.

How Did Zzyzx Get It’s Name?

Zzyzx was once Soda Springs – a prehistoric quarry site that was used as an army outpost and was a popular stop for Indians, Spanish explorers, miners, and the railroad. Then a radio evangelist from Los Angeles, Curtis H. Springer, decided to make the mineral springs into a health resort in 1944. Using the powers of the minerals in the spring, he was creating “the last word in health” and thus named the resort Zzyzx – so that it would literally be the last word in any medical journal.

The health resort was a great success!…. that is until 1974 when the government realized that Springer had no real claim to this land and kicked everyone out and handed the land over to Bureau of Land Management. During the 30 years it was operational however, there are reports of mysterious unexplained healings that occurred due to the powers of the spring. Springer even bottled the spring water and sold it to travelers passing through the desert as well as supposedly sending shipments it all over the country…. it was the 60s after all. There was once a train connecting the health resort to the rest of southern California for easier access, but this has long been abandoned.

What is Zzyzx Now?

The land is now belongs to Bureau of Land Management, but a group of California State Universities also manage Zzyzx and use it as a Desert Studies center. Researchers are still examining the supposed healing properties of this mineral spring and surrounding area. 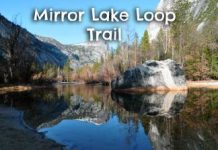