Hiking to Soldier Pass Cave is an awesome trek to a tucked away cave off the beaten path. This “secret” cave isn’t much of a secret anymore as it’s become instagram-famous due to the fantastic photos taken at this location. With this hike you’ll not only get to visit the cave, but also see the Devil’s Kitchen and Seven Sacred Pools along the way too!

There are two different ways to do this hike depending on your luck in getting parking. Just don’t expect any solitude as this is an extremely popular hike and will likely be packed with crowds.

There are two options for trailheads for this hike. The main trailhead (Soldiers Pass Trailhead) is located off of Shadow Rock Drive in Sedona’s Red Rock Country:

This lot has less than 15 parking spots and is gated. It opens at 8am and closes at 6pm and is free to park. Get there early!! Even at 7:30am, there were already 5 cars waiting in line to get into this lot.

If you didn’t get a parking spot, you can’t just wait around outside of the lot and wait for someone to leave. There’s no parking/standing signs on this street and it is patrolled and monitored by the police.

Your other options are:

What to expect along the trail

From the Solider Pass parking lot, the trail starts to the east. A common mistake is to go through the gate at the north end of the lot, which is for the 4WD road, but this is not the trail.

The trail will come to an intersection with Jordan Trail (which goes off to the right and leads to Cibola Pass trail, which is the alternate route for starting this trail). Go left to continue on Soldier Pass Trail. The trail is flat and exposed as it moves through the desert and easy to follow. Very shortly after this intersection you’ll come to the first point of interest, The Devil’s Kitchen.

The Devil’s Kitchen is a huge sinkhole that opens up in front of you. It’s had two major collapses roughly 100 years apart in the 1880s and another in the late 1980s and it’s expected that there will be further collapses in the future.

You can carefully walk around a portion of the sinkhole if you want to get a better look before returning to the trail.

After another roughly .5mi (just under), you’ll come to the next attraction on the trail – the Seven Sacred Pools. This is an area you’ll probably recognize from photos on Instagram. This will be on the left side of the trail and is marked by a marker on the trail. Depending on when you visit and the rainfall, the pools may or may not be full of water. If you go earlier in the year, before the heat of the summer, you’ll likely have water in the pools.

The spur is roughly 1.3mi from the trailhead (which is roughly just under a mile from the Seven Sacred Pools). It’s a very obvious fork in the trail. Take the trail to the right (which will probably be busier) to get to the cave.

The trail to the left continues along the “official” Solider Pass Trail toward Brins Mesa. There’s also a small National Forest wilderness sign on a tree along the trail to the cave just past the fork.

From here, the cave is roughly .5 mi. The “trail” first goes across a red rock plateau.

Then, it starts to climb. As you enter the trees it will continue to get steeper and rockier, climbing approximately 400ft, but still stays pretty wide. It’s well trafficked and easy to follow and will likely be swarming with other hikers.

Continue to follow the trail until it ends at the bottom of a cliff where you’ll see an opening in the wall in front of you where a portion of the face as fallen off to crate a shallow cave. (This is not the cave).

There are three “caves” here, or what could be mistaken for caves. Two are just areas of the rock face that have fallen off to create large arches in the wall (such as the one in front of you where the trail ended).

These “fake caves” are to the right of Soldier Pass cave. From the outside, Soldier Pass cave doesn’t look like much – just another arch where a portion of the wall has fallen off. The key difference here though is that there is a hole above the arch where you can see that the inside of the “wall” is hollow. Soldier Pass cave is in the trees on the right, but you probably can just look for the line of people waiting to go into the cave.

To get inside the cave, you will have to climb up a “shoot” with a pile of rocks that have presumably tumbled out from the cave have been loosely assembled into steps. Getting up the rocks is easier than going down as it’s still steep and there are some big gaps between some of the rocks.

At this point you will have now entered the cave. Take some photos, take a look around, and then carefully descend back down the “shoot” to exit the cave.

Once you’ve visited the cave, most people will just head back to their cars. If you want to finish the trail, instead go right and it’s just another roughly .5 miles to the end of the trail to the top of a ridge with views of the canyon.

From here you can either continue on and make this a loop (Brins Mesa Loop), or you can turn back. If turning back, just be careful to make sure you’re staying on Solider Pass Trail and not the 4WD road. It’s a little counter-intuitive again here as the wider obvious trail to the right will lead to the 4WD trail whereas the smaller trail to the left (which also makes a 90 degree turn) goes back to the parking lot. We saw several people accidentally on the 4WD road, which isn’t the end of the world, but it’s a little longer and not much to see. Look for signs that say “Solider Pass TR” to know that you’re on the right trail.

Best Things to Do When Visiting Craters of The Moon

Visiting the Belly of The Dragon Tunnel 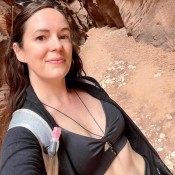 More Ways To See The World:

Calculating Calories: How Much Food To Take Backpacking

Finding The Subway Cave in Sedona (Via Boynton Canyon Trail)